How far is Fenghuang Train Station from Ancient Town: the distance is about 10 km.

In addition to public buses, you can also travel from Fenghuang Train Station to the ancient town by Fenghuang Maglev (under construction), a medium-low speed maglev rapid transit line in the future. The maglev train runs at speeds up to 100km/h, connecting Fenghuanggucheng Railway Station with Chengbei Tourist Center. 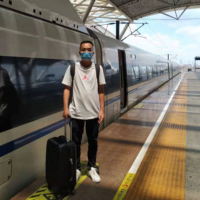 Fenghuang Gucheng Railway Station (Fenghuanggucheng) is a railway station  that serves Fenghuang Acient Town in Xiangxi, Hunan Province of China. It is a train station on the Zhangjiajie - Jishou - Huaihua High Speed Railway, which is scheduled to open on December 6 of 2021, linking Changsha, Zhangjiajie, Fenghuang, Furongzhen Railway Station, Jishou, Huaihua in just 1 - 2 hours.

How to Get from Fenghuang Railway Station to Fenghuang Ancient Town ?