You can travel between Hong Kong and Changsha by air or high speed train via Shenzhen. Taking a flight would be the most harssle-free option buy very expensive. The most popular way is taking a high speed train via Shenzhen, which is fairly cheap but very fast and comfortable. And more importantly, it will open high speed rail connection between Changsha and Hong Kong in 3Q of 2018, which means you don’t have to make a change of train at Shenzhen but run directly from Hong Kong to Changsha by then. 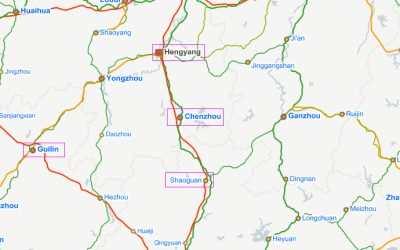 Since there are no direct bullet trains linking Hong Kong with Changsha at present, you will have to make a transfer at Shenzhen’s North Station or Futian Railway Station, where you can catch a high speed train to or from Changsha South Railway Station.

From Hong Kong to Changsha

Step 1: From Hong Kong to Shenzhen: You can get from Hong Kong to Shenzhen by Hong Kong’s MTR service and Shenzhen’s metro service (see the route solution). Just take Hong Kong’s East Rail Line to Lok Ma Chau Station, then pass the border control and walk to Futian Check Point Station on Shenzhen side to take the metro line 4 (Longhua Line) to get to Shenzhen North Station or Futian Railway Station (on metro line 2 and line 3) , where there are high speed trains to Changsha South Railway Station.

From Changsha to Hong Kong

This option is a little complicated and only be applied when the high speed trains between Shenzhen and Changsha sell out. Then you can travel on this route: Changsha South – Guangzhou South – Shenzhen North or Futian Station – Hong Kong.

How Far is from Hong Kong to Changsha?