How to Travel between Hong Kong & Beijing by Train

How long: Beijing is far from Hong Kong with a long distance of 2224 kilometers (about 1381 miles). 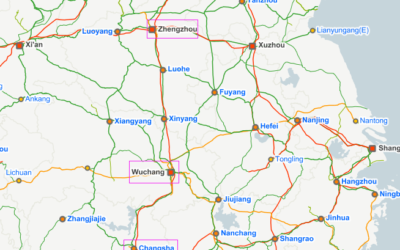 The Best Way : Train VS Flight

By air : Flight is the fastest way but very expensive and often get delayed or cancelled. Besides, airport in Beijing or Hong Kong are far from city center.

By rail: High speed train is the best way, which runs on time and the fare is fairly cheaper than a flight ticket. It has more leg room and offers you a view to see China’s cities and countries.

From Hong Kong to Beijing: There is only one direct high speed train: G80 leaves from Hong Kong West Kowloon Station at 08:05 and arrives at Beijing West Station (BeijingXi)at 17:01, taking 8h56.

How to Buy Tickets for HK – Beijing High Speed Train

When to buy tickets?

Where to buy tickets?

You can buy tickets at train station in Hong Kong or China, or book online or using a trusted ticket agent.

In Hong Kong: You can buy tickets with your passport at Hong Kong West Kowloon Station, where there are 28 ticket counters for passengers booking or collecting or refunding tickets. They accept Hong Kong dollars or Chinese RMB. But 23 out of 28 ticket counters only sell tickets for trains starting from or ending at Hong Kong (eg: HK to BJ train or BJ to HK train). If you travel beyond Hong Kong (eg: Guangzhou to Beijing or Beijing to Shenzhen), you will have to buy them at the 5 designated ticket windows or using a ticket agent.

Note: There are 39 ticket kiosks in West Kowloon Station offering English instruction, however, foreigners can not use them to book tickets as it don’t accept your passport but only Chinese ID cards.

In Beijing: You can buy tickets in Beijing’s any train station, including Beijing South, Beijing West and Beijign Railway Station. Just go to the one close to you with your passport.

If you’re worried about tickets being selling out, or not speaking Chinese or Cantonese or living just outside China & Hong Kong and want to book tickets in advance. Thus, you can use an online ticket agent. Below are two reputed online ticket agents who get possitive reviews and recommended often on Trip Advisor:

You can also travel between Hong Kong and Beijing on a high speed train with a transfer at Shenzhen or Guangzhou:

From Hong Kong to Beijing via Shenzhen: Take Hong Kong’s East Rail Line MTR serivce to Lok Ma Chau station first, then get across the border and walk into Futian Checkpoint station on Shenzhen’side, from where you can access Shenzhen Futian Train Station via metro line 4 and line 2 with a transfer at Civic Center (Futian Checkpoint – Civic Center – Futian). From Shenzhen Futian Station, you can take G category to Beijing West Station.

From Beijing to Hong Kong via Shenzhen: Just do as explained above in a opposite direction (Beijing West – Shenzhen Futian – Hong Kong).

Via Guangzhou: Guangzhou has more bullet trains to or from Beijing than Shenzhen. You can also travel on this route: Hong Kong – Shenzhen – Guangzhou – Beijing by high speed train.

* High speed sleeper trains are the way to go when it comes to save your time and money. They are morder, comfortable, running in the afternoon and arriving at next morning & saving you the accommodation fees. There are 4 high speed sleeper trains running between Shenzhen North and Beijing West, 6 between Guangzhou South and Beijing West. All of them run 4 times weekly on Friday, Saturday, Sunday and Monday.

Hong Kong – Beijing by Through Trains