See the page: How to get to Fenghuang by train and bus

See the page: How to get to Fenghuang by train and bus 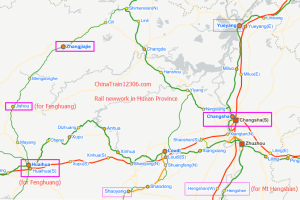 The railways in red & orange are high speed rails (for D or G trains) and the green lines are regular rails for K, T, Z trains.

Check Your Train Times to Huaihua

How to Take a Train from Huaihua to

In this section, you’ll learn how to get from Huaihua to some popular destinations by train

Huaihua to Guilin by train