This page explains how to travel between Hangzhou and Huangshan by direct high speed trains, or go via Shangrao by a connecting train if the only one direct train sells out. Furthure more, you can also go by bus from Hangzhou West Station to Huangshan Tunxi. 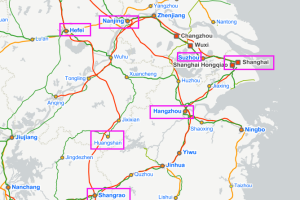 The railroads in red and orange are high speed rails for G and D trains, while the green railways are regular rails for T, K, Z trains. You high speed trains travel on this route: Hangzhou – Shangrao – Wuyuan – Huangshan.

From January 5, 2019, there will be 33-36 high speed trains running between Hangzhou and Huangshan. New high speed timetable will be added online soon.

If you have any questions on your Hangzhou – Huangshan train travel, just contact Jack at chinatrain12306@gmail.com, I’d love to offer help. Refer to ask Jack for more details.

Where & When to buy

Buy online: China train tickets go on sale online 30 days in advance, but don’t use the official China train ticketing site www.12306.cn as it doesn’t have an English version site available and it requires you to pay only with a Chinese bank card or any online mobile payment like WeChat Pay or Alipay. It doesn’t accept your foreign credit cards. Thus, you can turn to use a third-party site, who provides English version live China train timetables and offers online ticketing service. Below are two trusted online ticket agent, who get positive reviews on Trip Advisor or Trustpilot:

You can place your order anytime with the above online agents, who will buy the tickets for you once released. They can even deliver tickets to your hotel. They will also provide you professional help on how to get to the train station, how to ride a taxi or a metro, how to take your train or even offer one-to-one help when you run into trouble.

You can have a flexible option with more high speed trains by splitting your journey: Hangzhou – Shangrao (Shangrao Railway Station) – Huangshan. Just get from Hangzhou/Huangshan to Shangrao first, then take a connecting train to Huangshan/Hangzhou. Remember to allow yourself at least 50 minutes connection time for catching your next train.

If you want to travel between Hangzhou and Huangshan, here is great resource for you: https://littlegreybox.net/2015/08/03/how-to-get-from-hangzhou-to-huangshan/ .

There are buses running between Hangzhou West Bus Station and Huangshan Bus Station in Tunxi, taking about 2.5-3 hours.