How to Travel between Hong Kong and Chengdu

Chengdu, capital of Sichuan Province also the home to giant pandas is about 1800 kilometers from Hong Kong, the Special Administrative Region in South China. Both of them are hot travel destinations in China. Travelers now can travel between Hong Kong and Chengdu by high speed train with a transfer at Shenzhen & Guangzhou (Hong Kong – Shenzhen – Guangzhou – Chengdu). 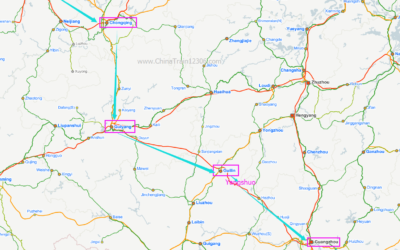 Below explains you the steps on how to travel from Hong Kong to Chengdu by bullet trains:

Currently, there are no direct high speed trains linking Hong Kong with Chengdu. Thus you have to make a transfer at Shenzhen and Guangzhou.

Note: Hong Kong’s high speed train station West Kowloon Station will open in 3Q of 2018. Accodring to the latest schedule plan, Hong Kong will have direct high speed trains to Shenzhen & Guangzhou as well as Guilin and Yangshuo, but no direct trains to Chengdu temporarily.

You can trael between Hong Kong and Shenzhen by Hong Kong MTR service and metro in Shenzhen. Shenzhen North Station or Shenzhen Futian Station are the stations that serves high speed trains to or from Guangzhou, from where you can ride bullet trains to Chengdu.

Both Shenzhen North and Shenzhen Futian Station have bullet trains to Guangzhou South, but Shenzhen North has more trains and can be easily reached by metro line 4 from Futian Checkpoint metro station.

From Shenzhen to Hong Kong: Just do as explained above in opposite direction (Chengdu East – Guangzhou South – Shenzhen North – Hong Kong).

High speed train service linking Guangzhou and Chengdu has been launched from January 25 of 2018. As of February, there are 9 daily D class high speed trains running between Guangzhou South Station and Chengdu East Station, taking 9.5-10.5 hours, and ticket fare is from CNY488.5 in a second class seat and CNY641 in a first class seat.