Currently, there are no direct high speed trains linking Hong Kong and Zhongshan and passengers have to make a transfer in Guangzhou South Station (HK West Kowloon – Guangzhou South – Zhongshan). But before making your rail trip, passengers should figure out that Zhongshan City has several train stations for service to or from Guangzhou. Zhongshan North Station, Zhongshan Train Station and Xiaolan Train Station have the most trains to or from Guangzhou South, while Nantou Station and Nanlang Station have less connections. You’d better know which train station to take your train. 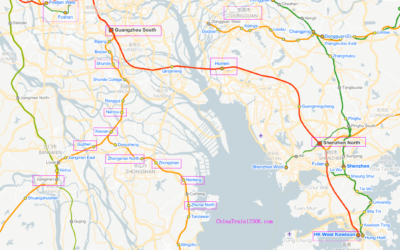 When to Buy Tickets

If you buy tickets at train stations, the tickets go on sale 28 days before travel date. If you book tickets online, the tickets start to sell 30 days in advance.

In Hong Kong: You can buy tickets with your passports at ticket counters in HK West Kowloon, which accept both HK dollars and Chinese RMB. Don’t use any self-service ticket machines there as they don’t accept any passports. Remember that if you travel beyond Hong Kong (eg: Shenzhen to Huizhou or Huizhou to Shenzhen train), you’ll have to buy these mainland domestic tickets at 7 designated ticket counters in HK West Kowloon Station.

In Guangzhou: You can also buy tickets at ticket counters in Guangzhou South, or others like Guangzhou East, etc.