How to Get from Zhuhai/Macau to Guilin/Yangshuo

Guilin and Yangshuo are famous and hot tourist destinations in Guangxi Province. A lot of foreign travelers would make a trip to Guilin or Yangshuo from Zhuhai or Macau. Thanks to the high speed rail, travelers now can travel there by direct bullet trains in less than 4 hours. (Zhuhai & Macau to Guilin & Yangshuo distance: 590 kilometers). There are two daily direct high speed trains. If they sell out, you will have to make a transfer at Guangzhou South. 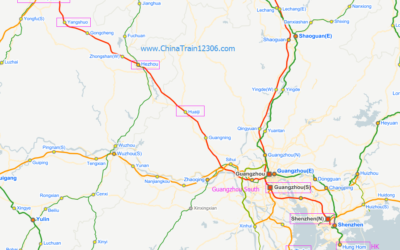 If the only two trains sell out, you can consider making a transfer at Guangzhou South (Zhuhai – Guangzhou – Yangshuo – Guilin). See option 2 below.

How to Get to West Street from Yangshuo Station

Yangshuo Train Station is far from Yangshuo Town, about a 45-minute bus ride away. There are public buses waiting outside the station, which will run to Yangshuo High Speed Bus Station, from where you can changed to a local bus to West Street in 7 minutes. See photo guide below:

China train tickets go on sale online 30 days in advance at official site www.12306.cn, which is only in Chinese. To check English version live train schedule, you can use  http://www.chinahighlights.com/china-trains/ , which also provides train ticket online booking service and that will charge you some service fees.