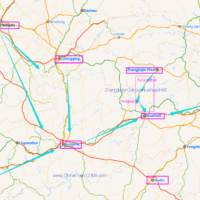 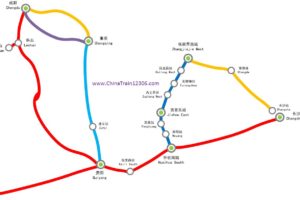 Fenghuang County in west Hunan Province, where the famous watertown Fenghuang Ancient Town is located, will has its own railway station – Fenghuang Railway Station by the end of 2021 when the Zhangjiajie – Jishou – Huaihua High Speed Rail starts operation. The high speed rail will link Fenghuang with Zhangjiajie West Railway Station, Furongzhen, and Huaihua South in just 1 hour by high speed train. Huaihua South is serving as an important transfer station for going to Chengdu, Chongqing, Guiyang, Kunming.

Chengdu – Fenghuang via Huaihua by Train

After the Fenghuang Railway Station opened at the end of 2021, it will be possible to travel from Chengdu to Fenghuang via Huaihua South by high speed train (Chengdu East – Huaihua South – Fenghuang). It will have more train options if travelling on this route.

From Chengdu to Fenghuang via Huaihua: Take a high speed train from Chengdu East to Huaihua South first, taking 5.5-6 hours. Then connect to a train to Fenghuang Railway Station, taking about 20-30 mins.

How Far is Fenghuang from Chengdu?

The distance is around 850 kilometers.

Can I travel from Leshan or Emeishan to Fenghuang?