How to Travel from Hong Kong to Fuzhou 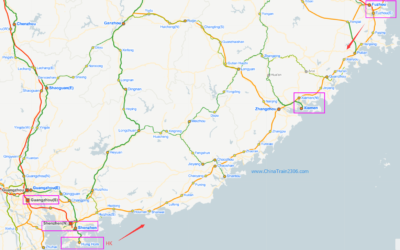 High speed trains between Hong Kong and Fuzhou has been launched. More info will be updated later.

Currently, there are no direct bullet trains linking Hong Kong with Fuzhou. But it will be available in 3Q of 2018 when Hong Kong West Kowloon Station begin operation.

Now, you will have to make a transfer at Shenzhen North Station (Hong Kong – Shenzhen – Fuzhou).Below explains how to travel from Hong Kong to Fuzhou by bullet train.

From Hong Kong to Fuzhou: First, take Hong Kong’s East Rail MTR service to Lok Ma Chau station, then get across the border and pass border control and walk into Futian Checkpoint metro station at Shenzhen’side, from where you can take metro line 4 to Shenzhen North Station. All the high speed trains to Fuzhou depart from Shenzhen North Railway Station.

About 25 daily high speed trains run from Shenzhen North Station to Fuzhou, of which 21 trains arrive at Fuzhou South Railway Station and 4 at Fuzhou Railway Station. Most of them are D trains with only one G train. Travel time ranges from 5 hrs to 6 hrs and ticket fares are CNY259 in a 2nd class seat

From Fuzhou to Hong Kong:Do as explained above in an oppisite direction. Take a high speed train from Fuzhou to Shenzhen North first, then metro to Futian Checkpoint station and Lok Ma Chau station, from where take MTR to central Hong Kong.

Major Stations along the Route