How to Travel Between Shanghai and Guilin & Yangshuo

How far is Shanghai to Guilin & Yangshuo: The distance is around 1500 kilometers. 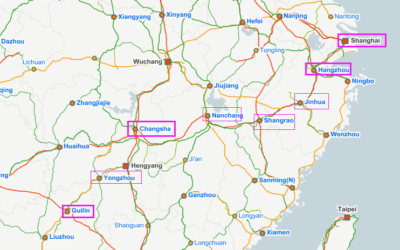 Bullet trains in China refers to those D G and C type high speed trains with a top speed of 200-350km/h.

Shanghai – Guilin: High speed train is the best way to travel between Shanghai and Guilin, which is comfortable, air-conditioned and runs on time. Currently, there are only one daily high speed train running between Shanghai & Guilin: G1501 from Shanghai Hongqiao to Guilin Train Station, and G1502 from Guilin Train Station to Shanghai Hongqiao. The journey time is 9-9.5 hours and ticket price is CNY695.5 for a second class seat.

Tips: It is a quite long train ride from Shanghai to Guilin or vice verse, you may consider seating at 1st class or business class seat, which are more comfortable but a little expensive.

If the only one high speed train sells out, you can make a transfer at Hangzhou or Changsha, just see option 2.

As there are only one direct high speed trains running between Shanghai and Guilin, tickets sometimes will be sold out. Then, you will have to make a connection at Hangzhou or Changsha.

Depart from Guilin or Yangshuo:

Can I take a bus from Shanghai to Guilin?

It is not recommended to take a bus from Shanghai to Guilin as Guilin is very far from Shanghai. High speed trains are the best option, or flight is also fine.

How can I buy Shanghai to Guilin or Yangshuo train tickets?

Try China Highlights, who can book you the tickets and deliver them to your hotel in Shanghai or Guilin, etc.