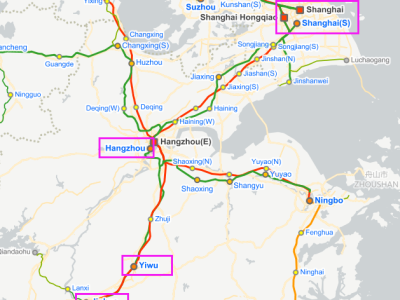 If you arrive at Shanghai Pudong Airport, you can take the Line 2 to Shanghai Hongqiao Railway Station, around 1.5 hours.

In addition to high speed trains, there are also regular trains operating between the two cities. They are slow (around 3 – 4.5 hours) but an economical way to travel between by rail.

Which Stations for Regular Trains between Shanghai & Yiwu

1. Shanghai South Railway Station: All the regular trains to Yiwu depart from or arrvive at Shanghai South. (By metro line 1 and line 3)

2. Yiwu Railway Station: This is the only rail station in Yiwu.