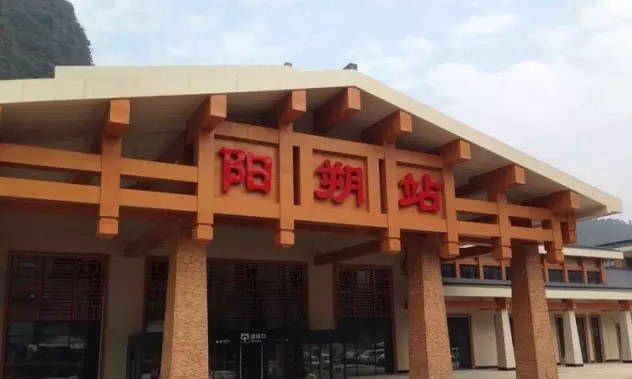 Yangshuo Railway Station Guilin (阳朔站, or 阳朔火车站) is located in Fanzengshan Village, Xingping Town, Yangshuo County, Guilin in Guangxi Province (阳朔县兴坪镇饭甑山村), 22 km from Yangshuo’s downtown and 6.5 km east of Xingping Town. It began construction in early 2014, and started operation on January 25, 2016. The Yangshuo Railway Station is the third largest station along the Guiyang – Guangzhou High Speed Railway, only next to Guiyang North and Guangzhou South.

How to Get from Yangshuo Railway Station to West Street

When you arrive at Yangshuo Railway Station by a train, just get out of the train station then look for the bus ticket office, which is located at the left side of the station exit. You can buy a bus ticket to Yangshuo (CNY 20), Fuli Town (CNY 15), or Xingping (CNY 5) and check the bus schedule at the bus ticket office, then board your bus (blue) with the ticket. Don’t miss it, or you’ll have to wait for a long time for the next bus. The bus will take you to Yangshuo High-speed Rail Passenger Bus Station (阳朔高铁汽车客运站, a bus statiion at Yangshuo town) in 45 minutes, from where you need to change to another bus (green) to get to the West Stree (CNY 1, 5 – 7 minutes).

Yangshuo Railway Station has been opened officially on January 25, 2016, and the train timetable has just been released on 12306.cn. It operates high speed trains (D category) to or from Guilin, Nanning, Guangzhou South, Guiyang North, and Hezhou, etc. See details below:

Travel time between Guilin and Yangshuo by D train is 30 minutes to 50 minutes, and train ticket price is CNY 20.5 for a second class seat and CNY 25 for a first class seat.

Travel from Yangshuo by Train

Yangshuo to Hanoi by Train