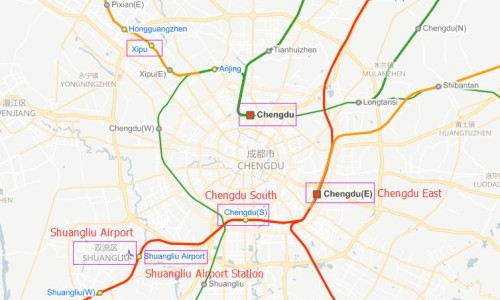 How to Get To Chengdu East

Chengdu East Train Station is serving as a transport hub, which is connected to its metro systems and linked by public bus or taxi. If you choose to get there by public bus, you can take bus 2, 38, 40, 91, 101, 146, 147 etc, then get off at Chengdu East Railway Station bus stop (程度东客站公交站).

How to Get to Chengdu Railway Station

Chengdu South Railway Station (Chengdunan, Chengdu Nan 成都南站) is located in high-tech new area of Chengdu, around 7km from Chengdu East Station, 10km from Chengdu Railway Station and 15km from Shuangliu Airport. The south station is linked by Chengdu-Chongqing High Speed Railway, Chengdu-Guiyang HSR, and the Chengdu-Mianyang-Leshan Intercity Railway. It serves as a high speed station operating about 29 C type high speed trains, which link Chengdu, Leshan, Emeishan, Mianyang, Meishan, Deyang on the Chengdu-Mianyang-Leshan Intercity Railway. Besides it is linked to Chengdu Shuangliu Airport at Shuangliu Airport Train Station by the C trains in around 10 minutes.

How to Get to Chengdu South Station

How to Get to Chengdu Shuangliu Airport

By metro: No metro linking Shuangliu Airport yet. The metro line 10 to link Terminal 1 and Terminal 2 of Shuangliu airport is schedule to open in the end of 2017.