How to Get to Nanning East

Note: Allow you plenty of time in case of missing your train. You’d better to arrive at the station and get your tickets collected at least 30 minutes ahead of your train’s depature.

Nanning Rail Trainsit is sill under construcion now, and it is estimated to be completed and start operation in 2016 when you can take the metro line 1 to get to Nanning East Railway Station. I will update the information latter when the metro start its service.

Nanning Railway Station (南宁站) is located in Zhonghua Rd, in Xingning District, more than 10 km from Nanning East （南宁东站）. Passengers can go to Nanning Station from Nanning East by train, bus, taxi or metro (still under construction) in the future.

The following fast trains goes from Nanning East to Nanning Station, just catch one if it suits your time. (Note: the schedule is for reference only, and you can search the most up-to-date timetable for trains between these 2 station at http://www.chinahighlights.com/china-trains/). It takes 11 minutes and costs CNY 5.5 for a second class seat and CNY 7 for a first class seat.

For a live schedule for train from Nanning East to Nanning, just enter “Nanning Dong” as the departure station and enter “Nanning” as the arrival station on http://www.chinahighlights.com/china-trains/ 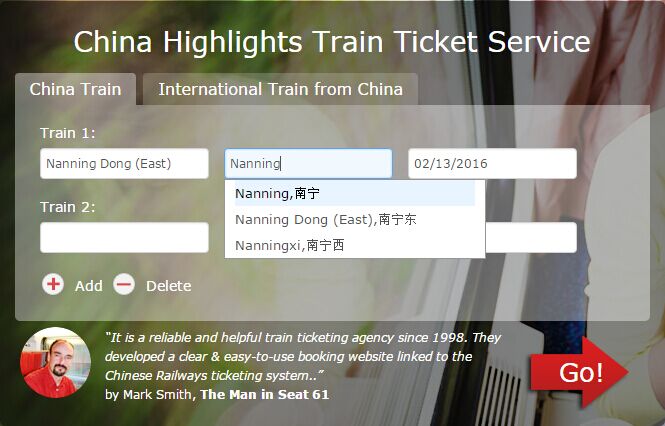 Passengers can take Bus k3, 7 to get to Nanning Station. The journey time is 1 hour 10 minutes to 1 hour 30 minutes.

Taking a taxi would be the most convenient way. It will cost you 30 – 60 yuan and the travel time is around 30-45 minutes (Just for reference).

The train timetable below is updated mannually, and if you want to check more live schedule for Nanning East, I advise you to check at China Highlights