How to Travel between Guangzhou & Foshan

In this page, you will learn how to travel between Guangzhou and Foshan by high speed train or regular train, or subway, or how to get to Lecong Furniture Market from Guangzhou, and how to get from Foshan to Guangzhou Airport by bus. Just ask Jack if you have any questions.

How far is Foshan from Guangzhou : Guangzhou is very close to Foshan with just a distance of 30 kilometers. 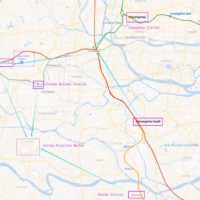 If you have any questions on your Guangzhou – Foshan or Shunde train travel, just ask Jack. I’d love to offer my help. Contact Jack. 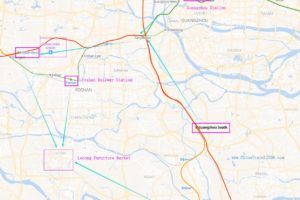 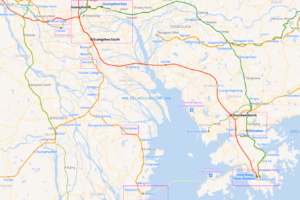 From Guangzhou: Over 70 D or G category high speed trains to Foshan are departing from Guangzhou South Railway Station, which is a bit far from city center. However, you can also go from the centrally-located Guangzhou Railway Station, which has 15 C or D category high speed trains to Foshan West Station. The travel times are nearly the same.

Foshan Railway Station (Foshan) is the old train station in Shancheng District of Foshan City. The station has no metro linking but only can be accessed by a lot of public buses like bus 105, 106, G12, 100, etc.

You can buy tickets with passenger passports in person in any train stations in Guangzhou, including Guangzhou Station, Guangzhou East, or Foshan’s any train stations like Foshan West, Foshan Station, Shunde Station, etc. Just go to the one close to you with easy access. You cannot use the Chinese official ticketing site www.12306.cn as it doesn’t have a English version site and it only accepts payment by Chinese bank card.

In addition to high speed train, you can also travel between Guangzhou and Foshan by subway, namely the Guangzhou – Foshan metro line (short for GuangFo Line). The Guangfo Metro or called Foshan metro line 1 is tran-city metro service linking Guangzhou and Foshan, opened in 2010 and is still developing. The Guangfo line extends from Lijiao Station in Guangzhou and ends at Xinchengdong Station in Shunde District of Foshan City. If you want to get from Guangzhou to Lecong Furniture Market in Foshan by metro, you can get off at Kuiqi Lu station (魁奇路站), from which you can transfer to Lecong Furniture Market by bus or a taxi.

Apart from being the birth place of the Chinese Kungfu star Bruce Lee, Foshan is also widely known among foreigners as a good place for sourcing furniture. Lecong Furniture Market located in Lecong Town in Shunde District of Foshan is the best-known wholesale marketplace for furniture. If you want to get from Guangzhou to Foshan Lecong Furniture Market, you have the following options:

1. By metro & bus: Take Guangzhou-Foshan metro line to Kuiqi Lu station first, then get exit to take a bus or taxi to Lecong Furniture Market.

3. By taxi: Foshan is not very far from Guangzhou, you can hire a taxi anywhere in Guangzhou to Foshan. But taxi fare will be a bit high.

By airport bus: There are frequent airport bus running between Foshan and Guangzhou Baiyun Airport.