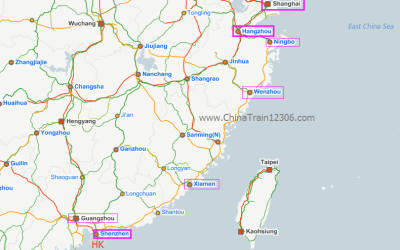 Currently, there are 11 daily high speed trains running between Shenzhen North Railway Station and Hangzhou East Train Station using D type bullet trains. Of the 11 bullet trains, 4 are high speed sleeper trains, which leave at night and arrive in the next morning and helps save you the cost on an accommodation, and the other 7 are daytime high speed trains.

You can also travel between Hong Kong and Hangzhou via Shenzhen & Guangzhou (Hong Kong – Shenzhen North – Guangzhou South – Hangzhou East). This route is faster but the fare is a bit more high and requires you to make two transfers. It is not so convenient, so I would not recommend you to travel on this route.