Hong Kong is a special administrative region in South China, and Chongqing is a municipality in Southwest China. The distance between them is about 1465 kilometers.

Below explains how to travel by bullet train from Hong Kong to Chongqing via Shenzhen and Guangzhou. Here are the short summary: 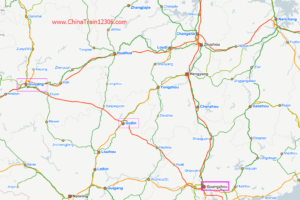 From Hong Kong to Shenzhen: You can travel from Hong Kong to Shenzhen North Railway Station by MTR service & Shenzhen metro. Just take East Rail Line MTR service to Lok Ma Chau station first, then pass the border and walk to Futian Checkpoint station at Shenzhen side to catch metro line 4 to Shenzhen North Railway Station, where there are direct high speed trains to Guangzhou or Chongqing (Don’t take the Shenzhen-Chongqing direct bullet train G1314, below explains why).

From Shenzhen to Hong Kong: Just do as explained above in the opposite direction.

I will advise you to travel on this route Shenzhen North – Guangzhou South – Chongqing West by making a transfer, which saves you a lot of time and money. Remember to allow 30-50 minutes for making the connection at Guangzhou South.